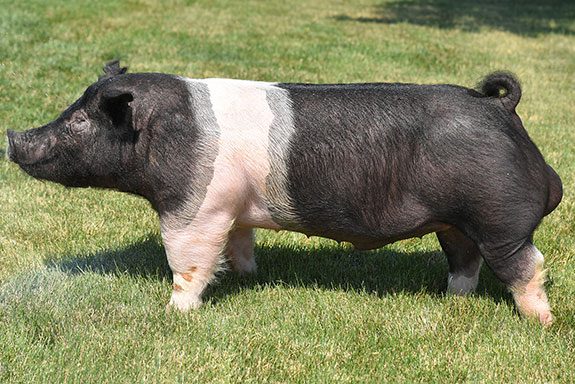 Bred By: Heimer Hamps
Stress Status: Carrier
Housed at: Heimer Hamps
Semen status: $250/dose
TO ORDER SEMEN, CONTACT: Karl Peter (217) 653-3941 *text when possible
This young boar saw several sows at HH at the end of the spring breeding season and we’re excited to finally have him pictured! His mother, 35-5 is the most extreme Hillbilly Bone daughter we’ve worked with to date and her mother is a littermate to Peacemaker. 35-5 produced our best barrow at Houston in 2016, a barrow that was 2nd in Class to the eventual Grand Overall. Boot Cut is a Kiss My Hocks son that was part of the package deal when Laird’s purchased Distinct. Boot Cut’s dam is also a littermate to Peacemaker which means the granddam’s on both sides are littermates. Word’s can’t describe just how big chested this one is and yet he maintains squareness everywhere and is impeccable on his feet. 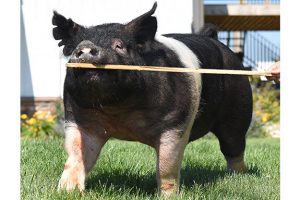