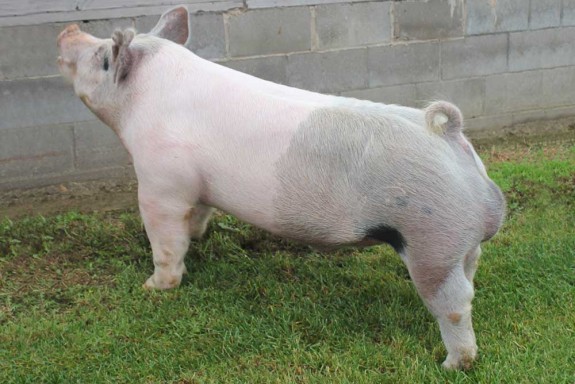 Description: In her debut litter, this sow (8-1) produced Show Me Your Swag that sold in the ‘The Chosen Three’ sale to The Stud in Texas. This litter was a planned mating from the start and in so many ways, a masterpiece pedigree that would be difficult to replicate now and in the future. When Stohlquist and I bought the Frank Davis sowherd, it was very apparent that 18-2 was the matriarch of that herd. As we studied sows and pedigrees that day, her influence was everywhere, and in the years since, she’s still making an impact. Within the pedigree of 69-1, you will find her multiple times in the first few generations and that only ensures added consistency going forward. Gone Viral needs no introduction here as a barrow sire but his pedigree should be mentioned (Insider x Priceless x Fatal x 18-2). The dam of 69-1 is a Camel Toes (Priceless x 18-2) and the bottom side of her pedigree reads (Big Time x Space Monkey x Fatal x 18-2). The Big Time x Space monkey sow would be a sister to the Grand Barrow at Indiana in 2011. I truly believe much of the stoutness in these boars can be traced back to 18-2…she was stout before stout was trendy. There are also 2 shots of Priceless here and that’s a boar that who’s made an impact at HH through his daughters. They’ve proven time and time again that they have the ability to produce progeny with more bone than their contemporaries – without screwing up the skeleton. Long story short, this boar has a unique pedigree that only solidifies his phenotypic appearance. Visitors have always loved 69-1. When folks stopped this summer to look at boars, most everyone inquired about the availability of ‘the calico’. He’s been a fun one to watch grow and he’s certainly going to be a fun one to use as a sire. His picture tells the story quite well. This guy is extremely stout, monster legged, very moderate in length and height and very big in the center part of his body. He’s always been this kind and has never wavered at any point in his maturity. If you’re still chasing bone, this one has it and he’s bred to generate it.