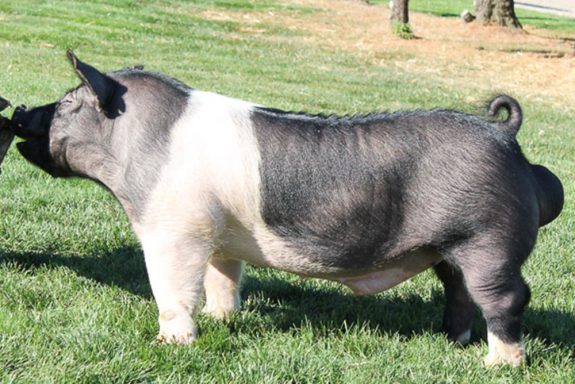 Stress Status: Negative
Housed at: Heimer Hamps
Semen: $300/dose
TO ORDER SEMEN, CONTACT: Karl Peter (217) 653-3941 *text when possible
We’ve already waded into the deep water with T118 and we are excited about our first litters in the crate. This was an early March boar that started breeding sows in early October – we couldn’t wait any longer.  Thunderstruck, the $100,000 boar we sold privately to Cain’s is a conversation for another day, but combining the most unique Hampshire sire we’ve seen and our best-generating 4K sow resulted in a herdsire that looks to have immense breeding value. The dam of T118 is 108–10, the most prolific Hillbilly Bone daughter we’ve had from the 4K breeding program. She’s the mother of Up the Odds, the Ante Up son at Genetic Edge that sired Moyer’s Grand Barrow at the 2016 Ohio State Fair and she’s also the mother of Calcutta, the other Ante Up son – now at 4K farms – that sired HH’s Grand Barrow at the 2016 California State Fair. This sow has proven her ability to generate sons that pass on their inherent traits and we’re confident T118 will do the same. Come to the farm and we’re confident you’ll see why we have lots and lots of litters on the way! 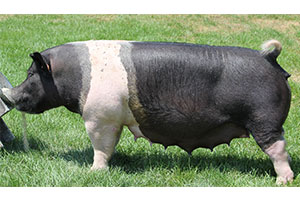