When I need perspective the most, I can usually find it by looking back, retracing a few steps and pausing a few minutes to remember the way it used to be. I’m no historian and I wasn’t alive in the 70’s but in the 80’s I was learning and I never had to wonder how the best barrows were made: the winning barrows of those years, and the years before that were nearly always sired by Hampshire boars. A little research will show that Hampshires were still the sire of choice for much of the 90’s, in fact you’ll be hard pressed to find a Crossbred boar in the Seedstock Edge until 1996-1997. Yet sometime in the late 90’s, the Hampshire sire lost its foothold atop the hierarchy for crossbreeding, giving way to the Crossbred sire and its dominance that is the standard today. 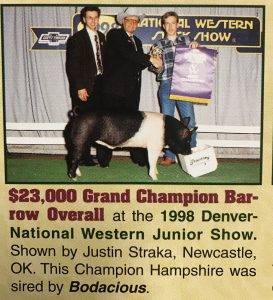 As a breeder, using a Hampshire boar to make crosses has been sporadic at best over the years. In fact, so sporadic that I remember a decision twenty years ago this March when I decided to use a Hampshire boar on a special crossbred sow. She was a F1, York/Duroc, sired by Shamrock and out of a duroc sow that originated from RN Perry. In January of 1997 at the WTC, a Hampshire boar named Bodacious had sold to Triple B for $23,000. After several nights of studying, he seemed like the perfect fit. You have to remember, in those days you didn’t spend 2 minutes thinking about a Crossbred boar to make barrows, you spent hours trying to decide which Hampshire boar could get it done! The rest of the story goes like this. Clark Straka visited the farm that fall and I’ll always remember the day when he spotted a belted barrow in the nursery deck, studied him on the grass outside by the grain bin and never flinched at the $450 price tag. After an undefeated 10-show campaign in Oklahoma, that belted barrow was named Grand Overall Market Hog at the National Western Stock Show in Denver! And Hampshire sired no less!

Its now 2017 and I honestly don’t think it would take both hands to count the number of times I’ve intentionally used a Hampshire boar to make crossbreds in the past 10 years. I’ll be the first to tell you that I’m part of the generation that fell in love with the Crossbred sire and I’m convinced every generation since then has done the same. A few questions for your consideration: Think about your own crossbred sows for a minute and determine how many generations back you have to go until you find a purebred sire in the pedigree? When you have crossbred sows in heat, do you start looking for a Hampshire boar to use? When you are trying to make pigs to classify as Hampshires for any number of shows throughout the country where pedigrees aren’t required, do you consider a Hampshire boar? Think about this, anyone can make Hamp-classifying pigs without a purebred parent on either side of the pedigree. Imagine trying to make a Yorkshire or Duroc without a purebred parent within the first or second generation in the pedigree. I believe this generational transition away from the Hampshire sire for cross-breeding is the single biggest reason the Hampshire breed has been in constant regression and yet I think we might have found a way to turn to the tide.

In March of 2016 at the NSR Annual Meeting, the Hampshire Board of Directors passed a motion to establish a Hampshire-sired barrow class at the 2017 World Pork Expo. There was overwhelming consensus among board members that this program could incentivize the use of Hampshire sires for purposes other than purebred litters and create another show opportunity for NJSA members. The WPX provided the perfect stage for such an event and the Hampshire board pledged $5000 in prize money for the division. The guaranteed payout for this division is: First-$2500, Second-$1000, Third-$750, Fourth-$500 and Fifth–$250. Barrows competing in this division must DNA-match to their Hampshire sire in order to receive prize money. To show a Hampshire-sired cross, the same rules still apply as if you were showing a standard cross – you must show a purebred barrow in order to participate. The winner of the Hampshire-sired division will compete against the crossbred division winners for Overall Champion Crossbred Barrow.

As a Hampshire board member, I am very proud of this initiative and very excited about the inaugural show in June. I hope enthusiastic, competitive show families will support this new division, hunt for barrows to show and commit to competing at the WPX. Heimer Hampshires is committed to this effort and to the Hampshire breed. To up the ante and show our support, we will offer the following awards above and beyond the prize money awarded at the show – in HH buying credit – for the top 5 Hampshire-sired barrows AND the top 5 Purebred Hampshires barrows IF they were bred and sold here at HH: Champion – $1500, Reserve – $1250, 3rd – $1000, 4th – $750 and 5th – $500

I can’t forecast the future but I’m optimistic about this program and the impact it can have on the Hampshire breed. Progress starts with measureable participation in the barrow class at the WPX and carries into increased demand and enthusiasm for Hampshire boars this summer. Growth continues late this summer and fall when more breeders take advantage of the opportunity and commit to using Hampshire boars to make litters eligible for 2018. Further advancement happens when the Hampshire Board convenes in March and decides how to expand this program and develop more opportunities for Hampshire-sired pigs to show. A sense of accomplishment will come someday when Hampshire sires are in high demand again, not only because there’s more enthusiasm for raising Hampshires but also because the next generation of swine breeders decide its ok to use purebreds to make crossbreds again. 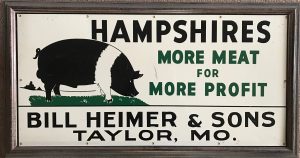 Call me crazy but I’m excited! I am a third generation Hampshire breeder and I won’t apologize for having passion for the belted breed! I often wish I could turn the clock back to the good ole days, when my grandfather ran Hampshire sows on clover fields and every day of the fall calendar was filled with Hampshire production sales. Heck I even wish we all had to buy boars to breed sows instead of using the same semen as the next guy. But I’m a realist and it won’t ever be like it was, it will only be as good as we make it. I believe the Hampshire Board took a big step towards making our breed better and Heimer Hampshire’s part to make this effort successful starts Thursday, online when we offer our first group of Hampshire-sired barrows. I look forward to continued dialogue about this program and sincerely appreciate all those who’ve supported it thus far. Let’s bring back the Hampshire sire!