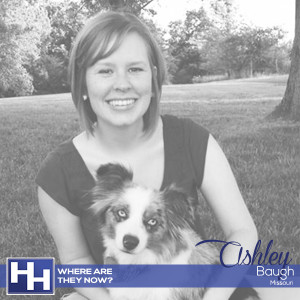 Ashley feels that showing was really one of the most important ways that she has developed her strong work ethic that has driven her to be successful in other areas of her life. Ashley said, “It was my job to make sure that my hogs looked the best that they possibly could and were trained well enough that I could drive them anywhere I wanted them to go. I worked and worked with them so that I didn’t even need to use the whip; I could just wave it next to their eyes. That kind of teamwork takes a lot of time in the barn, but I loved every second of it.”

Ashley also made important networking connections that helped her in college and her future career by her involvement in the show ring.

“I met my college advisor around the show ring. He’s the reason I went to Mizzou and has helped make my journey to vet school as smooth as possible. Showing through FFA also lead to winning scholarships that helped immensely with paying for my undergraduate education.”

Ashley learned so much during her time showing that she wants to encourages others to do the same. Her best advice for current and future showmen is, “Do not to get discouraged if your show year isn’t going as well as your had planned, especially when you are just starting out. Try to set other goals, like placing in showmanship or having your pig’s hair and skin looking it’s best. Most of the people at shows have been doing this for a very long time and know things that you might not know yet. Ask questions or start conversations with showmen that you admire and maybe they can give you some ideas to help you in the future.”

Most Memorable HH Moment: When I won my class at the state fair with a barrow named Socks. Socks had been sick for quite a while during the summer and I wasn’t sure if he would even make it to the state fair. Needless to say, Socks got a lot of TLC that summer and had become my favorite in the process. Jesse was standing outside the ring and gave me a high five as I walked out of the ring. He knew how much that first place meant to me and how hard I had worked just to get Socks there. He went on to win Reserve Heavyweight Cross.